Oxycodone is taken orally and is available alone.

Rapid Oxycodone Detox under sedation is a medical detoxification treatment offered by All Opiates Detox for patients dependent on oxycodone and oxycodone-containing opiates (Percocet, Percodan).

The blocker of choice used at All Opiates Detox is an implant. Dr. George prefers the Naltrexone implant blocker for several reasons. First, the Naltrexone implant lasts approximately two months, as opposed to Vivitrol (lasts about 28 days) or tablets (have to be taken daily). Another reason our physicians prefer the implant over the injection is for patients that may not be able to tolerate Naltrexone due to side effects, sensitivity or allergies. The implant can be removed from under the skin, whereas the injection stays in the body for about 28 days and therefore cannot be removed once it is administered. It is recommended to remain on Naltrexone maintenance therapy for at least one year to allow the brain to heal from the damage caused by the drug use and abuse.

The opiate detox treatment is safely performed in our state-of-the-art medical/surgical facility in Wyandotte, Michigan.

All Opiates Detox is the nation’s only rapid drug detox facility with Board-Certified Medical Doctors, who have over 25 years combined experience in the field of opiate addiction.

Overdose with oxycodone is common, especially when injected intravenously or used nasally.
Talk to us about family members and financing (800) 458-8130
GET STARTED

Oxycodone is used to treat moderate to severe pain. Oxycodone is taken orally and is available alone (trade names OxyContin and Roxicodone), in combination with acetaminophen (trade names Percocet, Roxicet, and Endocet) and combined with aspirin (trade names Percodan and Endodan). The analgesic action of oxycodone begins in about 10–30 minutes, peaks within 30-60 minutes and lasts about 3-6 hours.

Oxycodone has abusive properties similar to Morphine. Oxycodone (OxyContin) and all oxycodone combination products (Percocet, Endocet, and Percodan) are Schedule II due to their high drug
abuse potential. 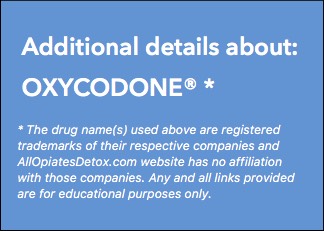 Common side effects are anxiety, constipation, dizziness, drowsiness, lightheadedness, mood swings, nausea, vomiting, and narrowing of the pupils. Serious side effects include slowed or irregular breathing and chest tightness.

Overdose with oxycodone is common, especially when injected intravenously or used nasally. These routes of administration are more likely to result in overdose since the delivery is in higher doses and onset is faster. Oxycodone overdose symptoms include cold, clammy, or blue skin; excessive sleep; narrowed or widened pupils; seizures; slow, shallow, or stopped breathing; slowed or stopped heartbeat; loss of consciousness; or death. Also, overdose is more likely when oxycodone is taken with benzodiazepines and alcohol.

The oxycodone combination with acetaminophen (Brand name Percocet, Roxicet and Endocet) may lead to liver failure and death due to acetaminophen (Tylenol) toxicity. The makers of Tylenol lowered the maximum adult daily dose from 4,000mg to 3,000mg. Liver toxicity is common since Tylenol (acetaminophen) is found in combination with other drug ingredients and many consumers aren’t aware that they are taking more Tylenol than prescribed.

It is estimated about 60% of Oxycodone use is for non-medical use. Oxycodone is potent and can lead to dependence, tolerance, and addiction after several weeks of misuse. Some patients end up injecting intravenously or snorting nasally to get more drug delivery once tolerance becomes a problem. Patients addicted to oxycodone are more likely to abuse heroin as it will become difficult to maintain use of oxycodone due to cost, availability on the street and (hard to obtain legally and illicitly).

Oxycodone, and oxycodone containing products, can be habit-forming, causing not only physical but also psychological dependence. Withdrawals may occur if the dose of the opiates is reduced or discontinued after long-term use. Using opiates for an extended period can lead to tolerance, where the user needs to increase the dosage of their opiates to achieve the desired effect, whether the desired outcome is pain control or euphoria.

Overdose with oxycodone is common, especially when injected intravenously or used nasally.
Talk to us about family members and financing (800) 458-8130