Actiq is an opiate used for opioid-tolerant patients for breakthrough pain in cancer patients.

Rapid Actiq Detox under sedation is a medical detoxification treatment offered by All Opiates Detox for patients dependent on the opiate Actiq.

The blocker of choice used at All Opiates Detox is a Naltrexone implant. Dr. George prefers the Naltrexone implant blocker for several reasons. First, the Naltrexone implant lasts approximately two months, as opposed to Vivitrol (lasts about 28 days) or tablets (have to be taken daily). Another reason our physicians prefer the implant over the injection is for patients that may not be able to tolerate Naltrexone due to side effects, sensitivity or allergies. The implant can be removed from under the skin, whereas the injection stays in the body for about 28 days and therefore cannot be removed once it is administered. It is recommended to remain on Naltrexone maintenance therapy for at least one year to allow the brain to heal from the damage caused by the drug use and abuse.

Actiq is an opiate used for opioid-tolerant patients for breakthrough pain in cancer patients. It is indicated only for patients tolerant to and already taking around the clock opioids for their persistent underlying cancer pain. Actiq is a solid form of Fentanyl citrate on a plastic stick. It is a synthetic opioid formulated as a berry-flavored lollipop that dissolves when placed in the mouth. About 25% of Actiq is absorbed through the buccal mucosa, and the rest is absorbed through the small intestines. Other forms of Fentanyl absorbed through the mucosal cavity are available as lozenges, sublingual dissolving tablets (brand name Abstral), and sublingual spray.

Actiq is absorbed through the mucosa while it’s being consumed, so it has a very rapid onset of 3-5 minutes. Its peak effect is about 45 minutes after the start of administration. Actiq duration of action is 2-3 hours. 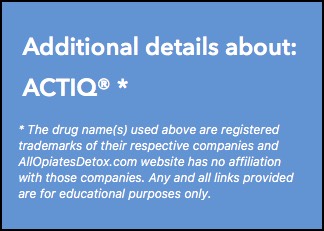 Actiq has been linked to tooth decay due to its sugar content. Common side effects include diarrhea, constipation, dry mouth, confusion, nausea, weakness, drowsiness, sweating, dizziness, and flu-like symptoms. Serious side effects may include dyspnea (shortness of breath), hypoventilation, and respiratory depression.

Respiratory depression can lead to hypoxia, and permanent brain damage can result from the hypoxia. Thus, even if a user survives an Actiq (Fentanyl citrate) overdose, these side effects may leave permanent damage.

Actiq is very potent, 50 to 100 times more potent than morphine and some fentanyl analogs may be as much as 10,000 times more potent than morphine. In addition to being very potent on its own, Actiq is prescribed in addition to other around the clock opiate medications. Due to its high potency, fast onset of action, short duration and use with other opiates, Actiq abuse is responsible for many deaths. Improper use and abuse of Actiq can lead to dependence, tolerance, and addiction.

Opiates can be habit-forming, causing not only physical but also psychological dependence. Withdrawals may occur if the dose of the opioids is reduced or discontinued after long-term use.

Once the patient develops a tolerance, it becomes even more difficult to stop using due to the withdrawals. Symptoms of withdrawals are an indication of physical dependence and addiction to the opiate Actiq. Most patients describe withdrawals as the worst, most frightening experience one will ever encounter.