Fentanyl was introduced as a very safe injectable general anesthetic and then decades later, as topical patches for severe pain.

Rapid Fentanyl Detox under sedation is a medical detoxification treatment offered by All Opiates Detox for patients dependent on the opiate Fentanyl.

Patients wanting to be opiate free reach out to us. We detox all opiates, rather than substituting one opiate with another opiate.

The blocker of choice used at All Opiates Detox is a Naltrexone implant. Dr. George prefers the Naltrexone implant blocker for several reasons. First, the Naltrexone implant lasts approximately two months, as opposed to Vivitrol (lasts about 28 days) or tablets (have to be taken daily). Another reason our physicians prefer the implant over the injection is for patients that may not be able to tolerate Naltrexone due to side effects, sensitivity or allergies. The implant can be removed from under the skin, whereas the injection stays in the body for about 28 days and therefore cannot be removed once it is administered. It is recommended to remain on Naltrexone maintenance therapy for at least one year to allow the brain to heal from the damage caused by the drug use and abuse.

The Fentanyl Patch (also called Duragesic patch) is an opiate used as an anesthetic and to treat severe pain. Initially, Fentanyl was introduced as a very safe injectable general anesthetic and then decades later, as topical patches for severe pain. Later it was available as lozenges, lollipops (tradename Actiq), dissolving tablets, and sublingual spray which are absorbed through the mucosal cavity.

The purpose of the Fentanyl patch was to provide up to 72 hours of continuous pain control and was prescribed mainly for use in palliative, cancer patients. As of 2012, Fentanyl was the most widely used synthetic opioid in medicine. Fentanyl has a rapid onset and short duration of action. Fentanyl is 50 to 100 times more potent than morphine, and some fentanyl analogs may be as much as 10,000 times more potent than morphine. 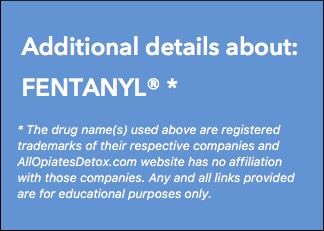 Physical symptoms of Fentanyl withdrawals begin about 12 hours after the last dose and depends on the amount taken and the route of administration (the patch is long-acting since it’s released slowly). Muscle aches, runny nose, sweating and difficulty sleeping are early, mild, withdrawal symptoms. The worst, more intense, physical symptoms include bone pain, diarrhea, muscle pain, and vomiting. Mood swings, depression, and anxiety are psychological symptoms experienced in the peak stages of withdrawals.

Improper use and abuse of Fentanyl can lead to dependence, tolerance, and addiction.

Opiates can be habit-forming, causing not only physical, but also psychological dependence. Withdrawals may occur if the dose of the opiates is reduced or discontinued after long-term use.  Using opiates for an extended period can lead to tolerance, where the user needs to increase the dosage of their opiates to achieve the desired effect, whether the desired result is pain control or euphoria.