Meperidine injection was widely used in hospitals for labor and delivery. I

Rapid Meperidine Detox under sedation is a medical detoxification treatment offered by All Opiates Detox for patients dependent on the opiate Meperidine (generic name Meperidine).

Rapid opiate detox consists of sedating the patient and removing the opiate Meperidine from the brain receptor while the patient is sleeping. Acute withdrawals are precipitated with an opiate blocker. These withdrawals will pass during the sedation period. Once the withdrawals are over, and the brain receptors are free of the opiate codeine, a blocker is placed to prevent any opiates from getting back into the brain receptor.
The blocker of choice used at All Opiates Detox is an implant. Dr. George prefers the Naltrexone implant blocker for several reasons. First, the Naltrexone implant lasts approximately two months, as opposed to Vivitrol (lasts about 28 days) or tablets (have to be taken daily). Another reason our physicians prefer the Naltrexone blocker implant over the injection is for patients that may not be able to tolerate Naltrexone due to side effects, sensitivity or allergies. The implant can be removed from under the skin, whereas the injection stays in the body for about 28 days and therefore cannot be removed once it is administered. It is recommended to stay on Naltrexone maintenance therapy for at least one year to allow the brain to heal from the damage caused by the drug use and abuse.

Psychological symptoms of withdrawals from Meperidine include agitation, anxiety, depression, disorientation, insomnia, and irritability.
Talk to us about family members and financing (800) 458-8130
GET STARTED

Meperidine (Also sold under the brand name Demerol) is an opiate used for moderate to severe pain. Meperidine injection was widely used in hospitals for labor and delivery. Its use (for labor) dropped tremendously due to its potential drug interactions and toxic metabolite. Meperidine is available in tablets, oral solution, and injection. It has a very rapid onset of action, 1 minute for the injection and 15-45 minutes for the oral. The duration of only two to four hours following administration is short when compared to Morphine. Meperidine is a Schedule II drug since it has a high potential for addiction and abuse. 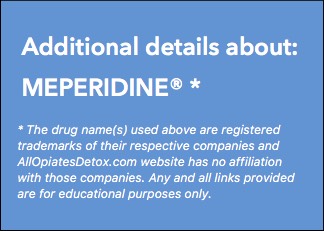 Meperidine may be abused more than other prescription opiates since it has a fast onset of action. Improper use and abuse of Meperidine can lead to dependence, tolerance, and addiction. Opiates can be habit-forming, causing not only physical, but also psychological dependence. Withdrawals (vomiting) may occur if the dose of the opiates is reduced or discontinued after long-term use.

Psychological symptoms of withdrawals from Meperidine include agitation, anxiety, depression, disorientation, insomnia, and irritability.
Talk to us about family members and financing (800) 458-8130